How Cervical Spine Injuries are Managed in Children

The cervical spine consists of the bones that make up your neck. There are 7 vertebrae within the neck and they start at the base of the skull. They are characterised by their small size and have openings that allow arteries to enable blood flow to the brain.

The cervical spine is very flexible and allows us to move our heads in many directions.  The first and second cervical vertebrae are called the atlas and axis and are specifically designed to allow rotation of the head.  The atlas (also known medically as the C1) does not have a vertebral body. Instead it is a ring shape with two prominent masses at each side. The axis (also known as the C2) has a bony prominence like a large peg called the odontoid process, which extends up through the atlas and is held in place by strong ligaments. 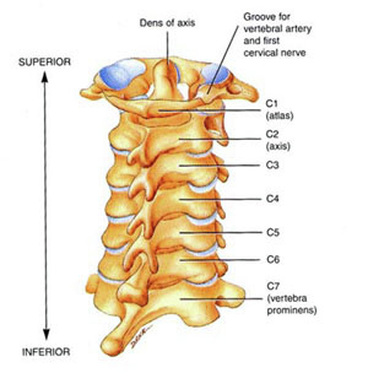 A child’s spine is not fully mature until the age of 8 years. Children below this age will have a proportionally larger head to body ratio and the surrounding ligaments are more lax. These factors increase the risk of injury and can be very serious in nature. The major cause of cervical spine injury is associated with a trauma but there are some children who are also predisposed to cervical injuries including children with Down syndrome, Klippel–Feil syndrome and previous history of neck surgery.

A trauma to the neck can result in bony or soft tissue damage.  If your child sustains a cervical spine fracture this is very serious and could result in paralysis or death.  The first course of action is to immobilise the neck to reduce risk to the spinal cord. Your child may have to be ventilated to protect their airways. Once they are stabilised, a treatment plan will depend on the severity of the fracture, the fracture site and whether or not the spinal cord has been compromised. The treatment options for neck fractures include a neck brace or collar for up to 8 weeks, traction (a rigid brace or a halo vest, pictured below) worn for up to 12 weeks or surgery. Rehabilitation following a neck fracture depends on the severity of the fracture and how much permanent damage was caused. The physiotherapist will focus on regaining function and optimising quality of life. This is a rare disorder characterised by the fusion of any of the cervical vertebrae during the early weeks of foetal development.  Typically a child will have a shortened neck and low hair line and restricted neck movements. The spinal cord may also be compromised by the fusion of the vertebrae and symptoms can include numbness, pins and needles, spasticity or paralysis. The management will depend on the severity but it is recommended that anyone with Klippel-Feil syndrome should have regular physiotherapy to prevent degenerative changes to posture and maximise neck movement.

Children who have Down syndrome are at risk of having atlantoaxial instability – abnormal movement in the neck, between the atlas and the axis – due to their ligaments being generally more lax than in the general population. In addition, the actual bones of the atlanto-axial joint described above may be poorly developed and are more risk of neck injury.  It is important to be aware of the symptoms of a neck dislocation and to seek urgent medical advice. The symptoms to look out for are: If your child has suffered a neck injury or if you are worried they have a cervical spin abnormality, we can offer a thorough assessment, commence rehabilitation and offer advice. Contact us to book your child’s assessment with one of our paediatric physiotherapists on 0207 884 0374 or email us at info@physiocomestoyou.com.