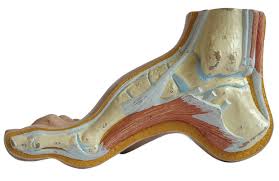 Pes cavus is the Latin term to describe the condition the natural arch, or in-step of the sole of your foot, is higher than normal. If the arch of your foot is particularly high compared to the considered “normal” levels, it can cause you some considerable pain and discomfort.  There are many ways in which the foot can be pulled into this abnormal positioning, and quite a few structures can be damaged or weakened because of this.  Some genetic predispositions can cause the bones to be formed like this from birth. Other neurological conditions, such as Charcot Marie-Tooth syndrome, can cause a shortening of the muscles in the feet and hands, pulling them into abnormal and deformed positions. This obscure positioning can often lead to difficulty finding shoes that fit, or ones that do fit give severe pressure sores and ulcerations around the foot.

Different portions of the foot can contribute to the increased height of an arch. The front portion of the foot, near to the toes, houses various muscles deep within the foot, which can be affected. The bones of the ankle and the structures responsible for their stability can also be responsible if the articular surfaces (parts of bone that connect with other bones in a joint) are misaligned.  Occasionally, these structures can be so grossly affected by neurological or arthritic change that surgical intervention is required to make the foot functional. Releasing the tight tissues or transferring weakened tissues to pull the foot back into correct positioning are common surgical techniques. Occasional bone fixation or having portions of bone removed to correct anatomical angles are both common practices in the surgical treatment of pes cavus.

Current research shows that a combined conservative treatment program (i.e. podiatry, physiotherapy and orthotics used in unison) can be as, if not more effective in the early stages of management of the condition. This same research shows that even in later stages of treatment, if there is no significant bony deformity, it can be just as effective in preventing further development of the symptoms.  The main goal of any intervention, whether surgical or conservative, is to prevent deformity, avoid further trauma, reduce excess pressure (which results in ulceration) and obtain a “shoe-able” foot. This is usually achievable by following a stretching program, exercises to build up the strength in the weak muscles, as well as referral to other services to have inner-soles constructed for better positioning and stability of the foot.

Have you had any treatment for foot abnormalities? Did you see both your physiotherapist and another health professional? Let us know about your treatment in the comments section below.